Examining the Role of Housing for Art-led Neighborhood Renovation: The Case of the Inner-city in Osaka

Nevertheless, these developments are generally not perceived as gentrification, because they are usually of small scale and are not associated with the “un-homing” of local long-term residents.

In order to provide an explanation for this phenomenon, this presentation turns to the characteristics of housing in Osaka’s inner-city. In the gentrification literature several aspects of housing have been considered as crucial for art-led neighborhood renovation. Most basically this is the physical space and the low maintenance constrains that allow artists to work, perform and live. Typically, this is initially also accompanied by cheap rents and living costs that increase their accessibility. For the further development, flexibility of tenure was considered as important to foster the commitment of residents, and policy initiatives, that weaken housing regulations, were understood as drivers of market-based development.

Based on interviews with artists and creators from Kitakagaya, this presentation gives an overview on the constrains inner-city housing in Osaka has for art-led neighborhood renovation. It argues that they have the potential to curtail gentrification processes and suggests that developmental trajectories of art-led neighborhood renovation depend strongly on the type of housing.

I am an urban geographer that focuses in his studies on housing issues of the inner-city. By drawing on the example of Osaka my research covers especially the time after the economic fortune of Japan had turned at the beginning of the 1990s. This period is marked by an increase of homeless people, vacancies, foreign residents, and more generally, a downturn of the local economy. Out of this particular inner-city context, I studied the impact of guest houses for foreign residents on the local community and economy and responses of the real estate market to adjustments that were made to the scope of public assistance, interpreting them as a resilient strategy that preserves the inner-city housing stock for socially disadvantaged populations. Through a survey about voluntary organizations in the former day laborer district Kamagasaki, I developed this agenda further, by showing their continuing ability to cater to socially disadvantaged populations despite the threat of gentrification and welfare reforms. Recently, I started also comparative research on homeless support geographies in contrasting urban welfare regimes, namely Osaka and Vienna. 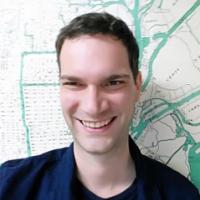